In just a few days, direct selling company executives and suppliers will gather in San Antonio for the industry’s premier event.  Returning as a highlight of the Direct Selling Association’s Annual Meeting is DSEF’s Experience of a Lifetime Auction. 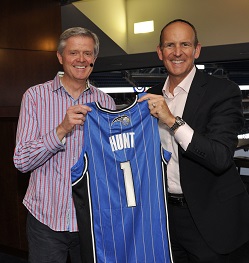 Marking its second year as DSEF’s marquee fundraiser, the 2015 Experience of a Lifetime Auction includes a new twist: a Silent Auction to complement the Live Auction held at the Awards Gala on June 2. The decision to include a Silent Auction component resulted from the success of last year’s event, which remains among the most memorable fundraisers in DSEF history—and allows the Foundation to expand its work on behalf of the industry.

“Enhancing the reputation of the direct selling channel begins with advancing understanding of our unique business model,” explains Gary Huggins, DSEF Executive Director. “Through research, events, partnerships and education programs, DSEF helps establish the direct selling industry’s legitimacy to key audiences—but none of our work would be possible without the financial support of our donors.”

Last year’s event can be described as nothing less than epic.  Truman Hunt, President and CEO, Nu Skin Enterprises, and Orville Thompson, CEO, Scentsy Inc. went head-to-head in a bidding war for the chance to attend an Orlando Magic game in the Founder’s Suite—as the guest of Amway’s Chief Sales Officer John Parker and President Doug DeVos.  When the bidding topped $50,000, John, who also serves as DSEF Board Chair, agreed to offer the package twice, raising $100,000 for the Foundation in a matter of minutes.

Thanks to his winning auction bid, Truman and a group of Nu Skin executives joined John Parker and Doug DeVos in Orlando for a behind-the-scenes tour of the Amway Center, home of the Orlando Magic. “Our friends at Amway treated our Nu Skin executive team to a VIP experience,” he said.  “We thoroughly enjoyed getting a glimpse of the NBA locker rooms, state-of the art work-out facilities and sitting in the VIP box in the arena, however, the best part of the day was interacting with the Amway team. We enjoyed sharing common experiences, valuable insights and celebrating our common vision of improving people’s lives and making a difference in the world.”

The fun, camaraderie and healthy competition that characterized 2014’s Experience of a Lifetime auction are only part of the reason that DSEF moved to expand the 2015 effort.

“The proceeds from last year’s auction funded vital DSEF programs that made a compelling, value-driven case for direct selling such as DSEF’s recent Multi-Industry Self-Regulation Panel, Campus Days programs, and National Consumer Protection Week efforts,” says Gary.  “Programs like these show consumer protection advocates, regulators, educators and students the good our industry does wherever you find us.  I thank all who participated last year, and look forward to an equally strong showing next week in San Antonio.”

The enduring excitement from 2014’s auction continues to drive anticipation for this year’s event. In reflecting upon last year’s auction, Traci Lynn Burton, Founder and CEO of Traci Lynn Fashion Jewelry, recalls how her adrenaline took over when she submit the winning $5,000 bid for a skydiving adventure with USANA’s CEO Dave Wentz.

“This was a life changing experience!” Traci says. “So glad I made the ‘jump’ and, yes, I will do it again!”