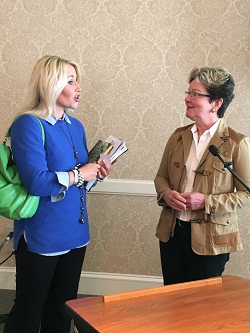 While leading academics, labor organizations and policymakers publicly discuss the growing trend toward independence in the workforce and its implications on US economy, the direct selling channel has long been a path to market for innovators and a driver of opportunity for entrepreneurs.

DSEF, which serves as the direct selling community’s education ambassador, explored this topic with professors, students and local businesses at the “Micro-Entrepreneurship and the Gig Economy” campus program at Belmont University in Nashville, TN, on March 30.

The campus program featured Lori Bush, Executive Advisor, Retired President and CEO of Rodan + Fields, a premium skincare company that uses the direct selling channel to market and distribute its products, and Will Rinehart, Director of Technology and Innovation Policy from American Action Forum, a policy think tank organization based in Washington, DC.

Lori explained to students and faculty how direct selling fits in the sharing economy—direct selling companies share marketing resources with independent entrepreneurs who can build businesses of their own.

“Direct selling is a shared marketing platform – a business in a box – that provides a royalty-free license to use the company brand, technology and marketing to create a scalable, micro-entrepreneurial business at very little cost,” Lori says. “It’s not an antiquated business model—through the use of technology and crowdsourcing, it’s a mainstream opportunity for entrepreneurs.”

Will explained the gig economy as independent contractors moving from one project or “gig” to another rather than seeking full-time employment. “The economic downturn and technology are driving this shift toward entrepreneurship,” he says. “People don’t think of gigs or collaborative consumption as employment, but rather, supplemental income. People use the resources they have – their car (Uber), their living space (Air BnB) or their artwork (Etsy) – to support their hobbies, meet people, earn extra income and choose their own hours.”

Drs. Linda and OC Ferrell, Distinguished Professors of Leadership and Business Ethics at Belmont University, hosted the Foundation’s event. “Our students are thirsty for knowledge on how to be entrepreneurs. Will presented the opportunities in the gig/sharing economy and Lori nailed the way micro-entrepreneurship (direct selling) fits in. We have an amazing opportunity to connect with faculty and students in a way we have not had before,” Linda says.

OC agrees, “Will defined individuals in the gig economy who move from one project to another as independent contractors. The sharing economy is the online gig economy as represented by Uber, Lyft, Air BnB and direct selling companies who operate an app to allow for ordering. These conceptualizations of how direct selling fits into the gig economy resonated with both faculty and students.”

DSEF plans to significantly expand its academic outreach over the next three years. The Foundation is uniquely positioned to open a dialogue with academic and students to demythify the channel through campus programs, academic symposiums and research.